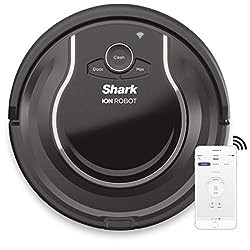 Roomba 690
Other robotic vacuum
General Info
Brand
Shark
Model Numbers Mouse over a model for a picture
RV720
Description
Wi-Fi connectivity and optional cleaning and scheduling robot vacuum. Self-cleaning brushroll that catches hairs, dusts dander etc.
Popularity 0-100 scale indicating how frequently people buy the product online. Recalculated daily.
96 / 100
Rank: #7 out of 165.
#1 is Roomba 960
Controls
Wifi / App Controlled Some robotic vacuums can be controlled by your smartphone through a mobile app, which is essentially a more advanced remote control. You are typically able to start/stop the vacuum’s cleaning, control ... Show more
No
Remote Control Remote controls typically enable you to start and stop the cleaning process and/or direct the vacuum’s movements to specific areas in the home. A remote control is an added convenience for those who w ... Show more
Yes
Auto Scheduling Feature Auto scheduling allows you to program the vacuum to a cleaning schedule (daily, every other day, weekly, etc.), where it turns on and cleans automatically at a set time. Otherwise, you have to manuall ... Show more
Yes
Battery
Battery Life Battery life indicates the maximum amount of time a vacuum can run on one charge. On average, robot vacuum batteries last around 1.5 hours, with higher end options getting up to two hours on a full ch ... Show more
1 hour
Charging Time How long does it take the battery to charge completely?
4 hours
Continues Cleaning Once Recharged When a vacuum’s battery dies, one of two things can happen: 1) the vacuum starts over cleaning without any memory of what it cleaned before the battery died, or 2) the vacuum will resume cleaning from ... Show more
No
Cleaning
Bin Capacity Regardless of the price of your vacuum, the dustbin still needs to be emptied manually. The more your vacuum is used, the more often you will need to change your dustbin. If you have a large home, the ... Show more
379 mL
Floor Type Different robot vacuums are made for different floor types based on the cleaning mechanism within the device, which can include a brush, a mop, or both. Robot vacuums with large brushes are best for c ... Show more
Cleaning Modes Most robotic vacuums come with an auto-clean mode (meant for maintenance cleaning over a large area) but some more sophisticated models will come with different cleaning modes, such as spot mode or sc ... Show more
Brush Type Most vacuums use brushes to pick up debris, since suction alone isn’t usually enough to effectively clean (especially on rough surfaces like carpet). These brush rolls can have different brush types, ... Show more
2 Side Brushes Brushroll
HEPA Filter HEPA filters help limit the allergens that get into the air when you vacuum. If you suffer from allergies, choosing a vacuum with a HEPA filter is a must. Note that HEPA filters do wear down over time ... Show more
Yes
Suitable for Pets The ability to pick up pet hair is a feature that will be explicitly noted in the vacuum’s specifications. If you have pets, it’s imperative that you choose a vacuum that’s equipped for picking up pet ... Show more
Yes
Physical Features
Dimensions When it comes to size for robot vacuums, pay particular attention to the height measurement. If the device is too tall, it won’t fit under beds, dressers, couches, and other furniture to clean in the ... Show more
Loading product dimensions...
Weight

Shark Ion Robot 750 was released in 2017. There are dozens of newer robotic vacuums on the market. Show newer Robotic Vacuums